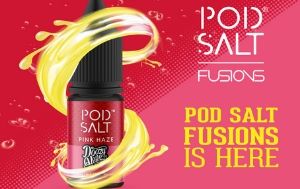 There are two  different types of pod mods:

Refillable pod systems: Also known as open system vapes. These come with small empty pods which are manually refilled by the user, allowing the user to explore a wide flavour range.

Prefilled pod systems: Also known as closed system vapes because they do not allow the user to refill their e-liquid. The pods come with pre-filled e-juice from the manufacturer. With pre-filled pods, you don’t have to worry about re-filling your e-juice as you just vape and dispose of the pod once you’re done and buy more from the same manufacturer. This means a disadvantage to this is that there aren’t as many flavours for pods with them being a newer vaping system.

Pod mods use a pod instead of a tank/atomizer like regular e-cigarettes have. This works the same way a tank or atomizer would. The small pod holds the juice so it is ready to be vaporized. Vapour goes to your mouth through the generally much smaller mouthpiece. An average pod holds about 1ml to 2ml of e-liquid, although some pods can be bigger. Pod mods allow you to use nicotine salts in your device. Nicotine Salts are a much stronger release of nicotine with a throat hit, to help banish nicotine cravings much quicker.

We have a Nicotine Salts range available with 5 flavours to choose from that are compatible with pod devices. We also collaborated with Pod Salt to bring out our Pod Salts Fusion Pink Haze specifically for pod systems. Our Tobacco flavour e-liquid range Baccy roots is also compatible in pod devices as it is 50:50 VG:PG.

The difference between the pod and your standard e-cigarette would have to be the pod itself. The other features are very similar. The battery capacity of the majority of pod vapes is 300mAh. How long your battery lasts in the pod system depends on how often you vape. Do not vape while charging as this risks explosion.

Affordable: Most pod devices are cheaper than most standard e-cigarettes or larger devices.

Discreet: Pod systems produce much less vapour/smoke. This makes them ideal for someone who wants to vape without drawing much attention to themselves, making them especially beneficial for vaping in public places.

Leak-proof: Other vape devices have the possibility of leaking such as starter kits, tanks, caps loosening, and liquid seeping through small gaps. Pod systems come with pre-built, disposable cartridges meaning there is a very low chance of leakage.

Size Difference: Pod systems are small and easy to carry around. Also, you do not have to carry around or store e-liquid bottles which can vary from 10ml to 120ml, either way much larger than the pod cartridges. You can even wear pod systems around your neck on a lanyard so you’ll never leave your vape at home again!

Easy to use: If you’re new to vaping, pod systems are the easiest to use. You don’t have to mess around with selecting the right wattage or re-filling your e-liquid. When you have run out of juice, it’s easy to remove the pod cartridges from the pod system.

Are Vaping Devices Allowed on Planes?