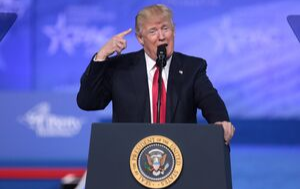 How will this affect the US?

Word on the street is that Donald Trump plans to ban all non-tobacco flavours in the US vape market.

In a recent interview, Trump stated “People are dying with vaping”. Him and wife Melania have claimed to be warning their teen son Barron not to vape. Although, all recent reports of illnesses caused by vaping have been linked to THC liquids which are marijuana-based products (we discussed this in our last Blog Post), some even contain harmful substances such as spice and these are normally deemed black market liquids.

But the possible flavour ban doesn’t stop there. When asked about the subject, Acting FDA Commissioner Dr Ned Sharpless stated “if we see a migration to tobacco-flavored products by kids, we will take additional steps to address youth use of these products”.

This ban will not only affect vapers in the US, but stores and distributors as well. Many business owners could lose a large part of their income or lose their business entirely. Even convenience stores and gas stations sell e-liquids, so this could affect their income too due to the popularity of the smoking alternative.

If this ban does happen, are we really going to see a reduction in lung related illnesses? Will we not see vapers who were ex-smokers return to cigarettes?

Deaths per year from-

Vaping: 6 Deaths in the USA

On the bright side, this possible ban isn’t likely to take affect anytime soon. This is because it can take weeks for the FDA to release its final ruling.

What can we do?

You can sign the petition against Trump’s flavour ban here, and you don’t have to be a US resident to play your part. Click the link here to prevent some of your favourite (and potentially all) flavours from being banned in the US: http://bit.ly/stoptrumpflavourban

Can Vaping Kill You?

Where is vaping illegal?